COVID-19 Survivor Story: 'There's a Lot of Fight in Me' 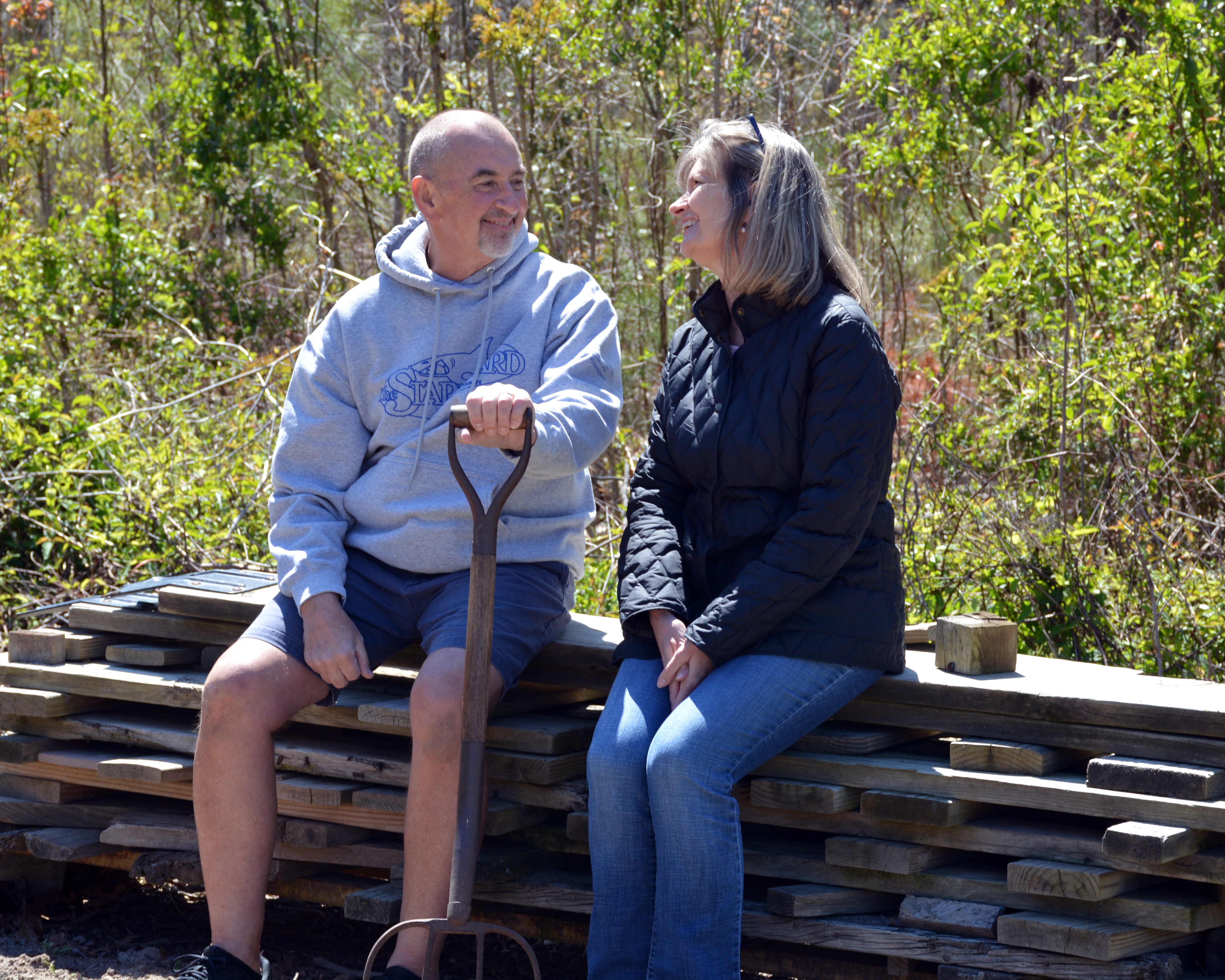 The shadow of COVID-19 has darkened Delmarva, but there are moments of light, too. Rays are shining on Ed Givens of Georgetown as he works the earth with pitchfork and hoe, preparing his garden for spring. Just a couple of weeks ago, Ed was on a ventilator in Nanticoke Memorial Hospital, fighting for his life. The Nanticoke ICU team fought along with him, and they won.

It all started with a trip to visit their grandchildren, at a time when a couple of cases of COVID-19 had been found in the United States, but it wasn’t yet the top of the news. People were worried about traveling to China or Italy, but a Wisconsin trip seemed perfectly safe. On the way home to Delaware, both Ed and his wife, Cindy, found they had a little cough.

“Our 2-year-old granddaughter had a cold, so we assumed we had picked something up from her,” Cindy said. “We started thinking it might be the flu.”

Cindy never had more than a mild fever and a slight cough, plus a brief loss of taste and smell, but Ed soon started to get sicker. “I tried to go out and do some yardwork, but I just couldn’t,” he said. Ed, who prides himself on his lawn and garden, had to admit it might be serious. They called Ed’s primary care provider, Dr. Joseph Karnish. He prescribed Tamiflu, but Ed’s condition worsened. The couple decided to go to a walk-in Clinic where Ed was given a flu test, which was negative, and then he was screened for this new disease, the coronavirus.

It took four days for Ed’s results to come back positive. That same day, Ed’s struggle to breathe became more than could be managed at home. Cindy drove him to the hospital. “Dr. Karnish suggested an ambulance, but we didn’t want to expose any of the ambulance crew,” she said. Instead, Dr. Karnish arranged for Nanticoke staff to meet him so he could be put in isolation garb.

Helping Ed walk into Nanticoke was the last time Cindy would see him for more than two weeks – and during that time, she feared more than once that it might be the last time ever.

“At a certain point, I had gotten so bad, I called my wife to tell her where my will was, where our safety deposit key was,” Ed said.

“We knew it was serious, but that made it real,” Cindy said.

Despite the care team’s best efforts, his condition went from serious to critical. Ed became the very first patient in Nanticoke’s new COVID-19 ICU. It was a dark time.

“The worst day was the day when Ed was put on the ventilator,” Cindy said. “I had to figure out how to tell my children.” And she had to tell them by phone. Family comfort and reassurance was difficult for Cindy to come by – she had also tested positive for COVID-19. She called family members to be with her children even before calling them with the news, because she knew she couldn’t be there, and she knew how devastating it was. “I didn’t want them to be alone,” she said. 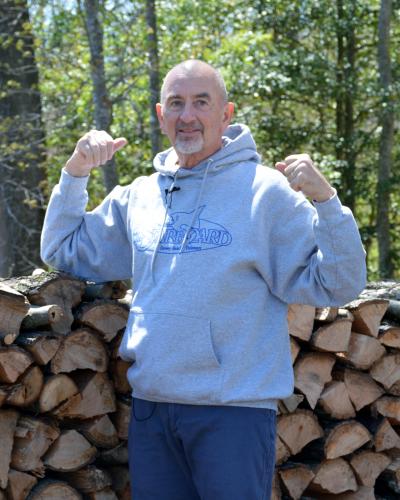 While Cindy’s symptoms were very mild, being COVID-19-positive meant she had to stay in isolation. Family members and friends called, brought food and left it on her porch, and did all they could. But the ICU nurses were one of her most important lifelines.

“I could call at 5 a.m. or midnight, and they would always pick up,” she said. “ICU nurses are absolute angels on this earth, and they became my best friends. They were just wonderful.”

They helped Ed FaceTime-call with Cindy so the couple could stay connected, and they worked to keep Ed’s spirits raised as well. When he wanted chocolate ice cream and there was none to be found in the hospital cafeteria, one of his nurses stopped on her way to work and picked some up for him.

He had spent so much time in the hospital and medicated that he was losing track of time. “I always wanted to know what day it was,” he said, remembering how astonished he had been upon learning that March had already passed and it was April. In the hospital, Ed was missing his hobbies – playing softball, growing giant pumpkins. “The nurses put up a calendar for me, and they decorated it with a softball player knocking coronavirus out of the park, pictures of gardening, giant pumpkins.”

The sickness was scary, but Ed was determined to beat it. “When Dr. (Kendol) Thomas, the pulmonologist, came in to see me one day, I told him

Ed’s physical fitness no doubt helped in his recovery. He had already pitched in five softball games in February as his Senior Softball team won their second national championship before falling ill. “I think a key factor in beating the virus was my health,” he said. “I come outside and get active every day.”

After six days on the ventilator, he started to turn the corner, and not a moment too soon. Ed says the ventilator was a difficult experience. “I would hate for anyone to go through that,” he said. “It felt like someone had jammed a wooden stick down my throat, I felt like I was choking the whole time.”

The Nanticoke team took Ed off the ventilator on a Sunday, and by Monday, he was telling Dr. Thomas, “I’m going home tomorrow.” Incredibly, he was right.

“They told me I had to keep my oxygen level above 90 percent,” Ed said. He made sure to breathe deeply and keep that O2 level where it needed to be – and Tuesday, April 7, he was discharged.

Like his spring yard, Ed is starting to flourish at home. His yard is meticulous, and he’s planting pumpkins in hopes that by the fall, he can once again have a harvest gathering at his home. He is back at the side of Cindy, with whom he’ll celebrate a 40th wedding anniversary in June.

And yet life still isn’t quite back to normal. The softball season is canceled, and Ed and Cindy are keeping their social distance. Cindy’s parents live nearby, but they are in their 80s, and she doesn’t want to run the slightest risk of infecting them, so she hasn’t been able to visit with them in a while. Both have reached out to the health department and blood bank to volunteer their convalescent plasma that might help others fighting COVID-19. 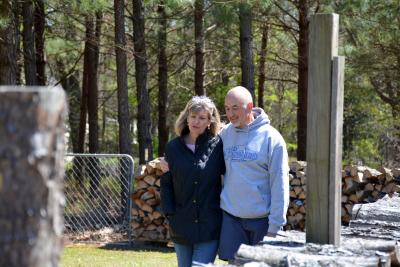 In addition to offering up their antibodies, the Givenses share some advice.

For family members, “Reach out, and don’t’ be afraid to accept help,” Cindy said. “It’s important to stay connected to others.”

For anyone who wants to avoid getting COVID-19, or who wants a fighting chance at beating it, the high-energy Ed recommends staying fit. “I know being active made a difference for me,” he said.