A NICU Journey Part 2: In the NICU 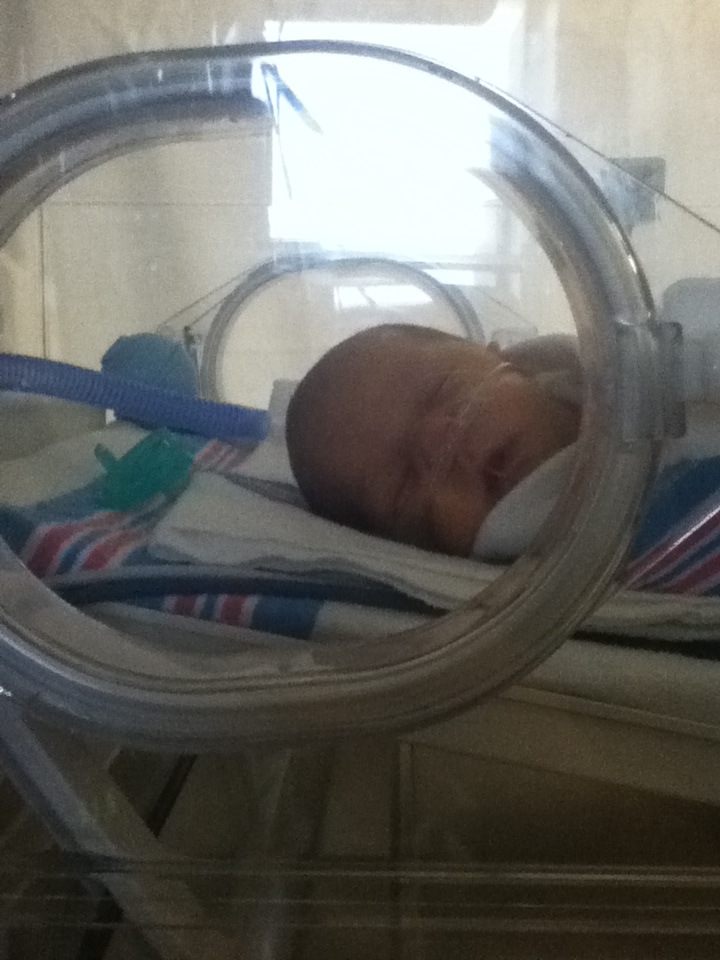 This is the second installment of the story of Gwenn Garland, a Salisbury mom and Peninsula Regional community relations specialist.  For Part 1 of A NICU Journey, click here. Peninsula Regional Medical Center would like to feature occasional stories and articles about the experiences of PRMC patients and staff. This is If you have a story you’d like to share on the blog, call 410-749-7172 or email [email protected].
In a NICU isolette, Erroll Garland struggled to breathe.
My baby had been delivered via emergency c-section, but we had both survived. I felt better: It was over. My baby was going to be fine. Everything was back to normal, right? Not quite. When I moved to the Mother-Baby unit, a nurse explained that my baby had some breathing issues, and was in the Neonatal Intensive Care Unit. I couldn’t nurse him right away and admire his precious new face, as I had with my first two sons. I couldn’t even hold him. The NICU? He was going to be OK, right? Aser Kandil, MD, a neonatologist working at Peninsula Regional thanks to a partnership with Children’s National Medical Center, came to my room to explain what was happening. The little guy’s lungs were filled with fluid and he couldn’t breathe, a not-uncommon occurrence after a difficult birth episode. The baby was on a ventilator and intravenous antibiotics; he would be in the NICU for at least 48 hours. I couldn’t stop worrying, but he was alive, and I knew he had one of the best teams in the Medical Center caring for him. By the next morning I had regained the ability to move my legs, and I was determined to shuffle into the NICU. We decided to call the baby Erroll – a daring movie star name for a boy determined to start life with a perilous adventure. He was off the ventilator and on CPAP – continuous positive airway pressure; that meant he was breathing on his own, but needed some assistance. I looked through the plastic isolette window at that sweet face obscured by tape holding his oxygen tube in place, surrounded by IVs, feeding tubes and monitor wires that made him look like a broken marionette in an entangling mesh of strings. By the next day, he’d been stepped down to oxygen via a nasal cannula – he was getting gradually better. I got to hold him for the first time. I attended grand rounds, in which the NICU patient’s entire care team – including doctors, physician assistants, nurses, nutritionists, respiratory therapists and speech-language pathologists – meets with the family to discuss the infant’s care and condition. Of course, my first question was, “When can I take him home?” But that was unanswerable – it was up to Erroll and his stubbornly unhealthy lungs. I was discharged and went home sadly empty-armed, but I came to the NICU daily, from about 7 a.m. to 6:30 p.m., to hold and feed Erroll. All around us were premature babies, most of them half his size, each with their own challenges. Also around us were the NICU nurses, who I soon realized were very special. They took on the role of substitute moms when parents couldn’t be there. They soothed the tiny, furious cries of stricken infants, bathed them gently, fed and talked to them softly. The nurses also had keen clinical insight; they could spot a potential health issue and respond with precision and speed. I attended grand rounds each day, gaining more knowledge and respect for the thoughtful, brilliant medical team so passionately dedicated to their patients’ care. For long hours, I watched the baby’s chest rise and fall with distressing speed, like a fish out of water. The rest of the time I stared at the monitor, hoping his heart and breathing rates would stay steady. I listened to his and other babies’ monitors ping out alarms when the numbers drifted into troublesome territory. Still, he seemed to be improving; they were weaning him off oxygen. By the time he was 6 days old, he was almost off of it. He was going to come home soon, and everything would be normal, right? But he seemed more tired than usual that day, refusing to wake up and eat, and show me those bright blue eyes. That fish-out-of-water gasping seemed worse than ever. I should have known by then that nothing was going to go as planned with this little guy. That was the night I got the phone call. Next: A Setback Click back for the conclusion of the story tomorrow at prmcsalisbury.com.