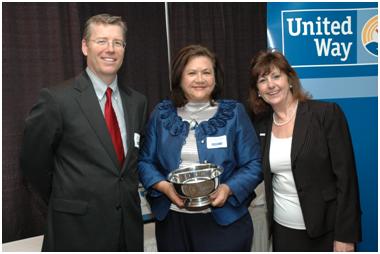 Presenting Dr. Peggy Naleppa, center, with the James Barrett Community Leadership Award are, on the left, Bruce Bright, United Way of the Lower Eastern Shore Board President and Kathleen Momme, Executive Director of the United Way of the Lower Eastern Shore.&#13;
Congratulations to PRMC President/CEO Dr. Peggy Naleppa who on Friday, April 27 received the James Barrett Community Leadership Award from the United Way of the Lower Eastern Shore. The award, named for the late, former leader of the local United Way, was created to recognize an individual for their outstanding, creative and inspirational leadership. In presenting Dr. Naleppa with the 8th annual James Barrett Community Leadership Award, United Way Executive Director Kathleen Momme praised the PRMC CEO as a true role model for her compassionate leadership, professional commitment and ethical standards. In additional to her 30 year healthcare career and executive leadership of Maryland's 6th largest hospital, Dr. Naleppa was recognized for her commitment to the arts and economic development, and for the partnerships that the Medical Center have forged with local colleges and universities to train students in the healthcare field. Furthermore, she was recognized for helping to grow Peninsula Regional's United Way campaign by an astounding 158% in just the past five years. "It is a true honor to celebrate a true community leader whose smile is contagious and whose enthusiasm for life and for doing what is right for the common good is an inspiration to all she knows," added Momme. Past winners of the James Barrett Community Leadership Award include current PRMC Foundation Board Chairman Leighton Moore, current PRMC Board of Trustees Chairman Marty Neat, Mitzi Perdue, Morgan Hazel, Dr. Bill Middleton and Tony Sarbanes. DelmarvaNow.com has a gallery of photos from the United Way Community Leaders Celebration - check it out!