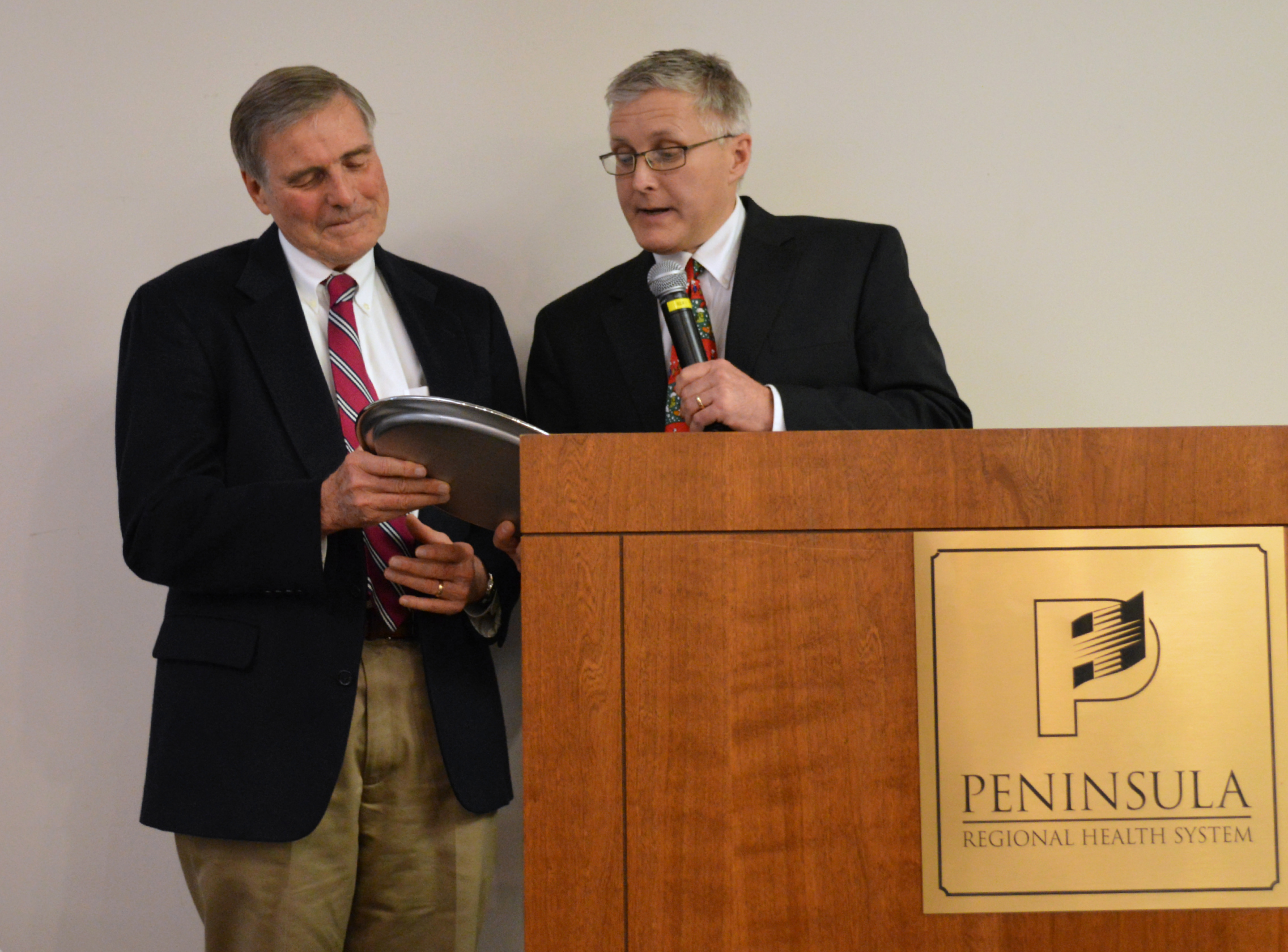 Salisbury cardiologist Dr. Donald Wood, left, is presented with a silver plate that proclaims him a recipient of the George W. Todd Memorial Award, in honor of the founder of Peninsula Regional Medical Center. Presenting the plate is William Todd, MD, a great-grandson of George Todd.
Peninsula Regional Medical Center recently celebrated the 42-year career of Donald M. Wood, MD, a cardiologist who was responsible for a great amount of growth and progress in cardiology on the Eastern Shore. Wood was presented with a plaque and portrait that will hang in PRMC’s Guerrieri Heart & Vascular Institute in his honor. He earned proclamations from the City of Salisbury and the Maryland House of Delegates, and many of his colleagues were on hand to pay tribute to his work and life as he retires from practice. He was also honored with the George W. Todd Memorial Award for his contributions, an award named for the founder of Peninsula Regional that has only been bestowed twice previously. Wood was an Eastern Shoreman by birth, but after his cardiology fellowship at the University of Maryland, he could have gone anywhere. “I had my interview in the Morgan Wing,” he recalled, “And I looked out the window and saw people fishing on the river. And I thought, that’s what I want to see.” Dr. Nevins Todd recruited Wood to help build Peninsula Regional Medical Center’s cardiology program. He came in 1972, when cardiology breakthroughs were changing the scene. “The concept of coronary artery bypass became popular in the 1960s, and the hospital here had the foresight to see it was going to be big,” Wood said. “We opened the first cardiac cath lab here in 1972; it was the first in the state outside of a university-affiliated hospital. Previously, only Johns Hopkins and the University of Maryland had done them.” That first year, Dr. Wood was on call for 365 straight days and nights. “I was the only cardiologist on Delmarva,” he said. But when his young daughter pointed out that he had been the only parent not present at a school event, he knew it was well past time to start recruiting more cardiologists to fill the growing need. The first person he recruited was Dr. John Green, whom he had met at the University of Maryland. “He stayed in my home when he first moved here. I was so glad to have help, I was happy to have him stay,” Dr. Wood said. Today, Peninsula Cardiology is a busy practice with 10 physicians. Wood was at Peninsula Regional for the first open heart surgery. “I remember the feeling of satisfaction seeing everything that we had worked for come to fruition.” That was just the first step in a remarkable transformation at PRMC that Wood was instrumental in engineering. “To see a humble community hospital become a top-notch heart program – it’s like watching a child grow up,” Wood said. After a 42-year career here, Dr. Wood has accrued wisdom in how to treat his patients. “Some doctors just see heart patients. But every patient is a person. When they come to see me, they often have fears, which I try to put at ease. I want them to feel they can depend on me. Remember the golden rule, and take your time with them, sit down and talk to them. Every patient has a story. If you can be a good listener, you can be a good doctor.” His reassuring, calm manner has made a difference to many patients over the years. Now, not a day goes by that a patient isn’t dropping off baked goods and thank-you notes at his office. During his well-deserved retirement, he plans to stay active, spending time with his family and enjoying hikes – and they won’t be gentle slopes. Just recently, Wood hiked five mountains in seven days, and ran a 10K in Boulder, Colorado. Wood is not a spotlight seeker, but his quiet wisdom has made an immense difference, not just at Peninsula Regional but for our whole community. Ever humble, Wood says: “I’ve gotten more out of this than I put into it. The friendships, the great people I have worked with – it’s been a wonderful life.”