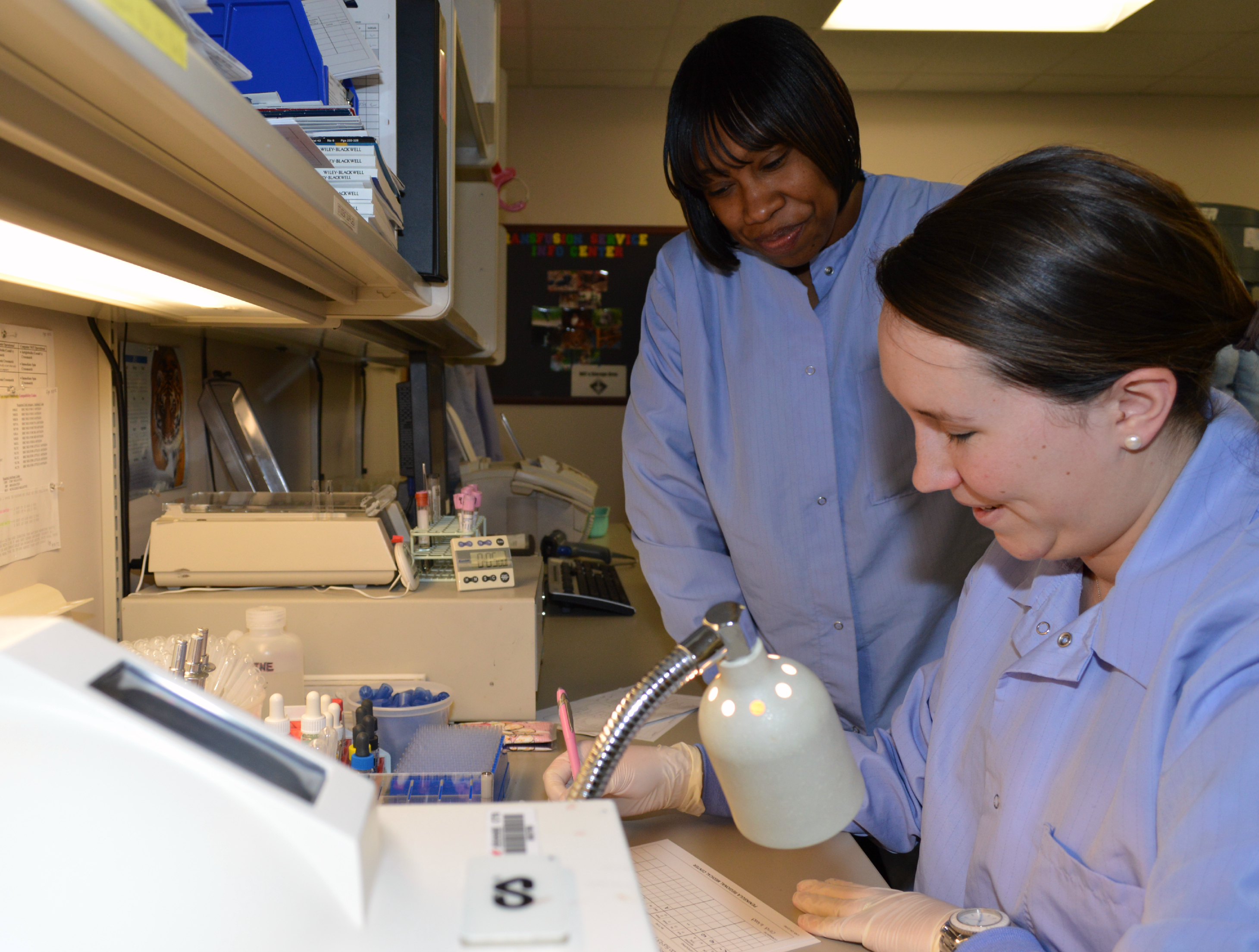 Farin Phillips, left, a Salisbury University student in the Medical Laboratory Science Program, works with Ty Cornish of Peninsula Regional Medical Center in the PRMC lab.
“It’s not magic,” Diane Davis-Hayes says. “But it might appear that way to some.” Davis-Hayes, Director of the Medical Laboratory Science program at Salisbury University, is talking about the laboratory results that appear on the screen for health care staff at Peninsula Regional Medical Center. The results are critical to the diagnosis and treatment of patients at the Medical Center, and with their reliable appearance when needed, it can be easy to forget that there was a person behind the numbers. “Someone worked really hard to make sure it was the right number, at the right time, for the right patient,” Davis-Hayes says. The laboratory, a sprawling labyrinth in the basement of the Medical Center, is home to 140 employees who diligently work to find medical results in 5,500 specimens a day from not only PRMC patients, but also for smaller regional hospitals and doctors’ offices. It’s also the occasional home to Davis-Hayes, who started working as a student at Peninsula Regional’s lab in 1979, and continued on in a standby capacity even after she took on a faculty role at Salisbury University. She has a doctorate in medical laboratory science. “I never stopped loving the work,” she says. “I was always interested in the science, and continuing to work at the lab keeps me from getting isolated in the academic world of textbooks and professional journals. When you’re doing the work firsthand, you see the nuances.” That’s what the Medical Laboratory Program at Salisbury University hopes its students will see during their rotations of work in Peninsula Regional’s lab. The students also work in medical settings across the state of Maryland. But she says Peninsula Regional is a good spot in which students can learn. “As an educator, Peninsula Regional is a ‘sweet spot’ — if a hospital is too small, students don’t see a variety of diseases, tests and equipment. If it’s too big, students don’t get the individual attention they might need, and it can be overwhelming.” And there’s another bonus for SU students who work in the PRMC lab — lots of people have been where they are. Like Davis, many employees of the lab are also Salisbury University graduates. Students get hands-on experience in the lab and perform many hours of important tasks, with guidance from the seasoned professionals surrounding them. Davis says she wants students to learn the standard to which she holds any medical laboratorian — “I need to know that you would you be safe to perform lab work on my grandson,” she says. “People at PRMC do very, very well by this standard — I’d let any one of them work on my grandson. The patient always comes first there.” She says she knows the hospital appreciates the work the students do, and appreciates the support PRMC gives students in return. “It’s a nice resource on both sides,” she says. As a laboratory worker herself, Davis says she thinks lab professionals deserve some recognition. “Labs are hidden away because some of what we do is hazardous — it needs to be isolated as a safety feature. That makes it less visible, but not any less important.” April 22-26 is Medical Laboratory Professionals Week, an annual celebration of the laboratory professionals and pathologists who play a vital role in health care. Peninsula Regional is celebrating its employees during this week, and Davis says she hopes people will remember that highly skilled, trained professionals are behind those numbers that appear in their medical records.