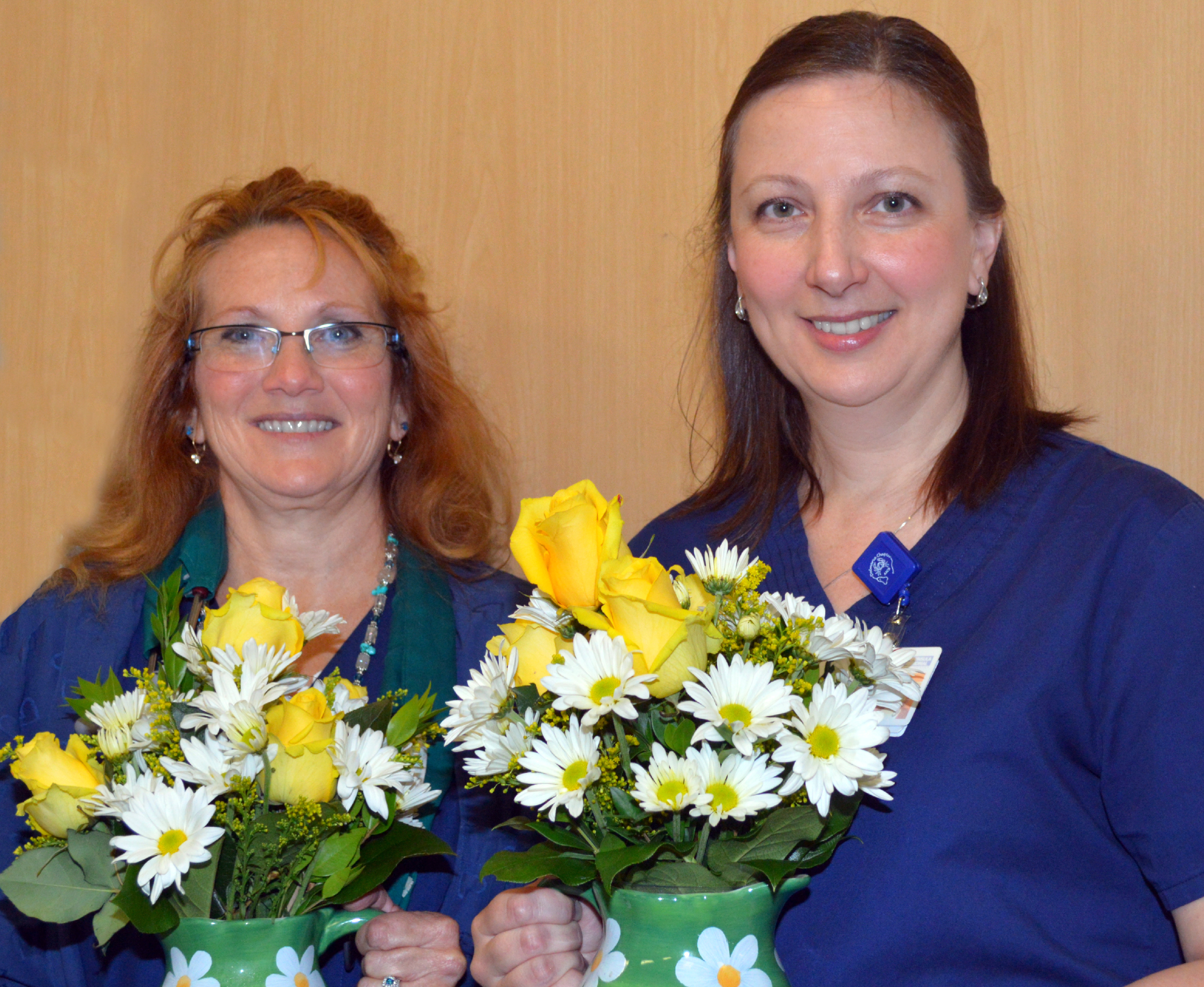 Therese Franks, RN, left, and Olha Smith, RN, of the ICU were honored today with the Daisy Award for Extraordinary Nurses.
Two Peninsula Regional Medical Center Intensive Care Unit nurses were recently recognized for their above-and-beyond efforts on behalf of a patient and his family. The patient, a 49-year-old man with cancer, was admitted to the ICU, but wanted to go home. Care coordination had made it possible to arrange for him to go home the next day, but due to his medical condition, it seemed as if he might not make it. His nurse, Olha Smith, RN, contacted her colleague, Therese Franks, RN, who works in PRMC's ICU as well as at Coastal Hospice. Smith and Franks both worked late arranging the patient's discharge that day, and Franks even stopped by the pharmacy to pick up his medications and dropped them off at his house. The patient made it home. He passed away that night at home as he had wished, surrounded by his beloved wife, children and dogs by his side. The exceptional efforts of Olha Smith and Therese Franks made all the difference for the patient and his grateful family. Both nurses earned the DAISY Award, and were honored in a ceremony before their colleagues, receiving a certificate commending them for being extraordinary nurses. The certificate reads: "In deep appreciation of all you do, who you are, and the incredibly meaningful difference you make in the lives of so many people." The honorees were also given fresh daisies, and a sculpture called A Healer's Touch, hand-carved by artists of the Shona Tribe in Zimbabwe. To nominate an exceptional nurse, visit http://www.peninsula.org/DaisyAward and share a story. "We are proud to be among the hospitals participating in the DAISY Award program. Nurses are heroes every day," said PRMC Chief Nursing Officer Mary Beth D'Amico. "It's important that our nurses know their work is highly valued." The not-for-profit DAISY Foundation is based in Glen Ellen, CA, and was established by family members in memory of J. Patrick Barnes. Patrick died at the age of 33 in late 1999 from complications of Idiopathic Thrombocytopenic Purpura (ITP), a little-known but not uncommon auto-immune disease. The care Patrick and his family received from nurses while he was ill inspired this unique means of thanking nurses for making a profound difference in the lives of their patients and patient families. President and Co-Founder of The DAISY Foundation Bonnie Barnes said, "When Patrick was critically ill, our family experienced first-hand the remarkable skill and care nurses provide patients every day and night. Yet these unsung heroes are seldom recognized for the super-human work they do. The kind of work the nurses at PRMC are called on to do every day epitomizes the purpose of The DAISY Award."