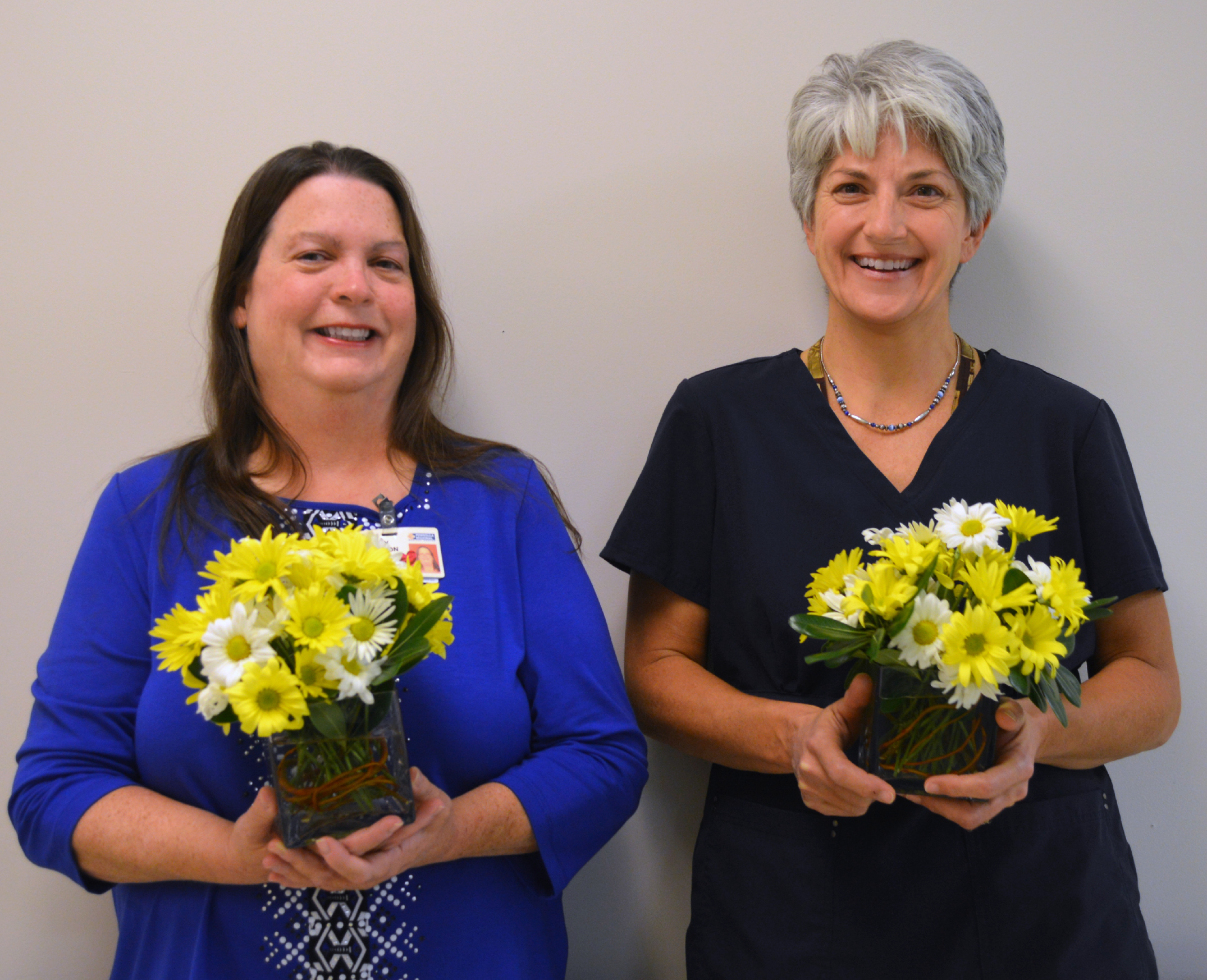 The passing away of patients is a difficult fact of life to which nurses must often bear witness, while ensuring the patient and family are offered dignity and comfort. The Daisy Award for Extraordinary Nurses was recently awarded to two PRMC nurses on 3 Layfield who paid a meaningful tribute to a special patient, bringing compassionate care and meaning to the patient's family. The daughter of an elderly patient who had passed away in the very early hours of an October morning shared with the staff his incredible life history, which included landing on Utah Beach as part of the Allies' D-Day invasion on June 6, 1944. He was wounded while being part of the effort to liberate German-occupied France, and was captured by the Nazis, who sent him to a concentration camp. He was released at the end of the war weighing only 85 pounds. The patient's family was very proud of their father's commitment to fighting for freedom and the sacrifices that he made during World War II. When PRMC nurses Karen S. Jones and Kathy Thompson heard the story, they decided that a tribute must be paid to this patient. When the family stepped out of the room, Jones and Thompson decorated it with American flags to honor his service and sacrifice. They said that in light of the fact that the "Greatest Generation" is fading away, it was important to pay tribute to a man and his family who had given so much for freedom. Their efforts touched everyone present, as they went above and beyond to bring compassion and honor during a time of sorrow. For their exceptional care and compassion, Jones and Thompson were honored with the Daisy Award in a ceremony before their colleagues, and received certificates commending them for being extraordinary nurses. The certificate reads: "In deep appreciation of all you do, who you are, and the incredibly meaningful difference you make in the lives of so many people." They were also presented with fresh daisies on behalf of the Peninsula Regional Medical staff, and a sculpture called A Healer's Touch, hand-carved by artists of the Shona Tribe in Zimbabwe. To nominate an exceptional nurse, visit www.peninsula.org/DaisyAward and share a story. Thanks to Christopher DiPasqua, RN, of Nursing Administration for listening to the family's story and nominating Kathy and Karen. The not-for-profit DAISY Foundation is based in Glen Ellen, CA, and was established by family members in memory of J. Patrick Barnes. Patrick died at the age of 33 in late 1999 from complications of Idiopathic Thrombocytopenic Purpura (ITP), a little-known but not uncommon auto-immune disease. The care Patrick and his family received from nurses while he was ill inspired this unique means of thanking nurses for making a profound difference in the lives of their patients and patient families. President and Co-Founder of The DAISY Foundation Bonnie Barnes said, "When Patrick was critically ill, our family experienced firsthand the remarkable skill and care nurses provide patients every day and night. Yet these unsung heroes are seldom recognized for the super-human work they do. The kind of work the nurses at PRMC are called on to do every day epitomizes the purpose of The DAISY Award."